How The Right Prosthesis Can Improve Mental Health in Users

The loss of a limb is an emotional change for most users and can result in a variety of psychological reactions. Mental health in prosthesis users is a significant issue and, if not addressed, can significantly impact their lives. Fortunately, finding the right prosthesis can help users combat these reactions and improve their overall mental health. With a prosthesis such as a high-functioning multi-articulating hand, users can regain the confidence and independence that may have been lost, allowing them to live happier and healthier lives.

There is no doubt that losing a limb is a significant and emotionally complex transition for patients. Someone who may have been living with complete independence and autonomy now has to relearn basic functions and rely on others for help. Increasing dependency on others can be very frustrating for amputees, as they want to return to their prior independence.

While these reactions are entirely understandable, that doesn’t mean that’s how it should be. We at Aether Biomedical recognize the toll that limb loss can have on individuals and have devoted ourselves to making a product to help users. We want users to recognize their strength and resilience, and we aim to help them do this with our product, the Zeus.

Equipped with a high-functioning multi-articulating hand, users can regain the autonomy and independence that was lost with their limb. With strength, dexterity, and flexibility, users can confidently go about their daily lives, regaining the power they feel they had lost.

There are many reasons that a recent amputee may struggle with mental health, but a common cause is a sudden lack of independence or autonomy. A patient who previously could live independently and perform most tasks without help suddenly requires assistance for seemingly everything. Such a drastic change can leave individuals feeling helpless, drastically impacting their mental health.

Bionic hands use ENG signals from the user’s residual muscles to control movement. As such, users can operate the hand with ease, going as far as to control each finger individually. With the hand, users can do many of the activities they could as before - independently.

Users can control the hand to hold objects large or small, heavy or lightweight, whether holding a key, lifting weights, or adjusting a camera lens. Our product, the Zeus, is particularly beneficial to users as they can individually customize finger grips and positions, altering them to their specific needs. Plus, with the greatest strength of available bionic hands, the Zeus allows users to grip objects confidently, knowing that they will not drop them.

With such a capable and strong hand, users will be able to go about their daily lives normally and independently. While there is no shame in asking for help (we all need it sometimes), the Zeus provides users the autonomy that may have been compromised with the loss of their hand.

Even just the knowledge of this alone can vastly improve users’ attitudes and outlook on life as they know that they are not solely dependent on the help of others. With conviction in their ability to live independently, users can quickly reestablish control of their life and confidence in themselves.

Improving Body Image and Self Esteem

Independence is only one of many ways that we believe the Zeus can help improve mental health in users. Another significant cause for depression in upper limb amputees is a negative impact on their body image and self-esteem. Losing a limb is a considerable change, both emotionally and physically. Without a hand, many users feel like they don’t recognize their bodies anymore, and they don’t want to feel as though they look different.

At Aether Biomedical, we recognize this fear in users, but we encourage users to embrace their differences with the Zeus. While many prosthetic limbs seek to resemble natural limbs as closely as possible, we believe there is power in standing out.

While the Zeus may function like a natural hand, it doesn’t look like one. With its sleek and elegant design, the Zeus represents dexterity and power. We feel that users should not hide their prosthesis but embrace it proudly. With our bionic hand, users can proudly show off their prostheses, demonstrating strength and confidence.

We also recognize the importance of self-expression, which is why we’ve got something new in the works. Soon, users will be able to get their favorite hydro-dipped pattern on their hand, with the option of 10 different colors, including silicon gloves. As a result, users can customize the hand to their liking, ensuring that it not only suits their body but their personality as well.

Many amputees fear that they won’t fit in with the loss of their hand, but we at Aether think that this is something to be proud of. As an amputee, users demonstrate incredible strength and resilience, and we hope to emphasize that with the Zeus. Our product helps users regain their sense of confidence in a variety of ways.

With strength, dexterity, and flexibility, users can take back control of their lives and live independently, with no task too big for them. Even beyond the physical components of our hand, we hope that users will improve their body image and self-esteem by proudly displaying a hand that is sleek and elegant.

There are numerous components to a user’s mental health, not all of which can be solved by a prosthesis. But, our hope with the Zeus is to help users regain their confidence and sense of control and learn to embrace their differences. We at Aether Biomedical believe that the right prosthesis can change a user’s life and improve their mental health, and we think that the Zeus is the hand capable of that. 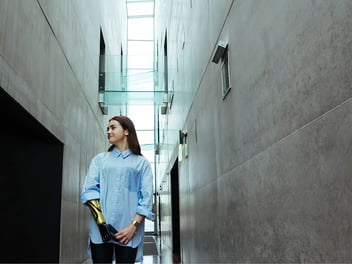 Making prostheses accessible to as many users as possible is a consideration manufacturers and...

For traditional prostheses, the repair process can be long and inconvenient for users. First, after...

Learning to Use a Bionic Hand

There is a learning curve for every prosthetic device, but for first-time users, this can seem...